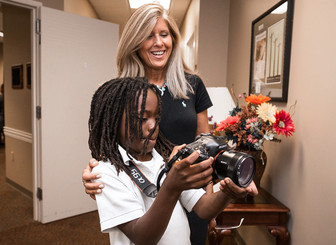 Exposure to live theater has an impact on children's success, according to the National Endowment for the Arts.

With those findings in mind, Northwestern's Wirtz Center for the Performing Arts invited hundreds of young people from Evanston and Skokie School District 65, many of whom had never experienced live theater, to see the Imagine U production of Me, Jane: The Dreams & Adventures of Young Jane Goodall.

The visit and production were part of the inaugural community-based partnership between Northwestern University and District 65 called Learn Imagine Through the Theater.

Combining lesson plans and learning experiences before and after children attend the play, the program is designed to make live theater more accessible to young people.

"Live theater is a hothouse for the imagination and a gymnasium for empathy," says Rives Collins, the show's director and head of Northwestern's Theatre of Young Audiences Program. Read the Entire Article

Partnership with District 65 exposes kids to live theatre 'a...